It's always a good day when you wake up to a new Allday album. Released today is his third,  Starry Night Over The Phone.


The album contains already released singles 'Wonder Drug', 'Protection', 'Lungs' and 'Restless' and will be followed by an 'Allday and Friends' set at Splendour and an extensive album tour around the country in venues such as the Hordern Pavilion and Festival Hall in August.


Although he has been based in LA for the past few years the album features a roll call of Australian talent having been executive produced by Simon Lam of Kllo, and track features include Japanese Wallpaper, Lonelyspeck and surprising collaborators The Veronica’s!

Overall this album has a sophistication of production we haven't seen from this artist before.  It seems like he's growing up and his music is much more structured and thematic.  It has the unmistakable feel of 90's LA R&B and pop but with a super unique Australian flair.

I love the minor feel to Allday's vocal. It's unapologetically somber in tone and comforting amongst the deep base lines and crunchy production.

The album definitely has a building and deliberate flow. Starting with the upbeat collaboration with Veronicas, moving through the dark and rolling "Lungs" and ending with one of the songs of the year "Wonder Drug."  I can't wait to see this show live at Melbourne's Festival Hall in August.

Starry Night Over The Phone

"Restless ft. The Veronicas."   This is such a surprising collaboration but i'm absolutely fine with it.  The woodwind riff at the very beginning, the light high hats, the layered vocals, and the Veronicas!  It's such a nice track and the already released video clip is nothing short of 90's bliss.

"Don't Wanna Push You Away Anymore"  has the optimistic charm of a young romance and a trudging momentum that really brings the theme of the song home.  A clean and crisp production drives this song and leaves us suspended with the repeated lyric "i wanna stay with you tonight, don't wanna push you away."  Really cool work.

"Protection" has a classic grunge guitar riff at the start which makes you think the song is going to be something it's not. The fattest of beats drop in and Allday spits clipped lines of text.  This track has that 90's R&B feel, straight out of LA,  which makes total sense.

It wouldn't be an Allday album without his signature melancholy fusion of pop, hip hop, R&B and almost spoken word or beat poetry. "Atmosphere" is a dreamy combination of all of those.  Not happy, not sad but sitting comfortably between the two.

"See You When I See You ft. Lonelyspeck" has a pretty huge production with multi layer backing vocals and a deep base line.  The collaboration with Adelaide based producer and vocalist brings together the perfect blend of earnest pop and driven rap.

"Lungs" is the hard hitting serious song of the album.  Fast and driven with a rolling beat and lyric.  This track is gangsta.

"Rhythms" is joyous  and soaring.  With so much production on Allday's vocal it's hard to break it down.  I know it's warped, distorted  and i love it.  A new crowd pleaser for sure.  This track  will go off live.

"Hold On" has a sense of longing and this lyric sticks out to me "I say if not now when.  Took you for granted back then.  My Grandma used to say don't put off till tomorrow what you could do today".

The last track on the album is the already released "Wonder Drug".  Dreamy, sensitive and driven this track has already been firmly cemented in our hearts as one of the best songs of 2019.

It's safe to say this album is fantastic.  It's got great range and depth which is really refreshing for an artist sitting in the pocket of R&B and Pop.

Allday is set to tour the country in August, supported by triple j.  We'll be at the Melbourne show so stay tuned for our coverage. 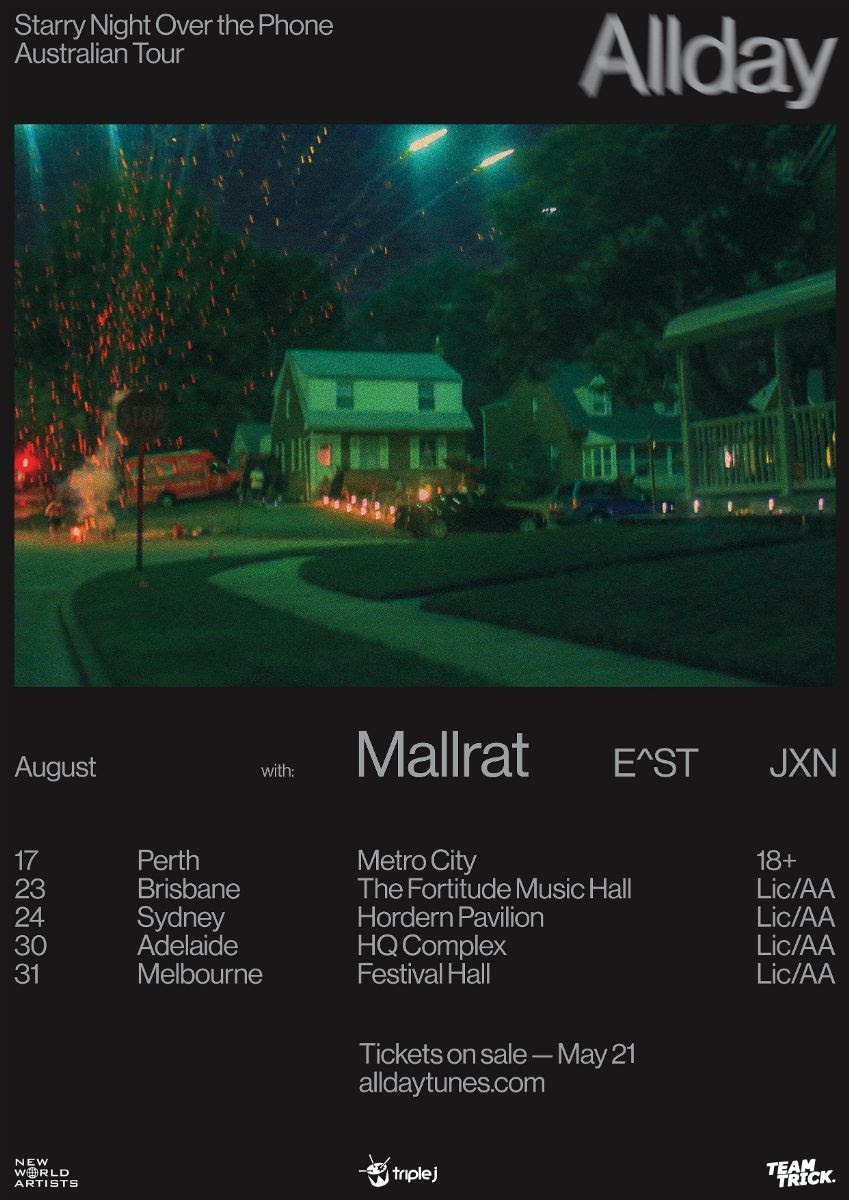