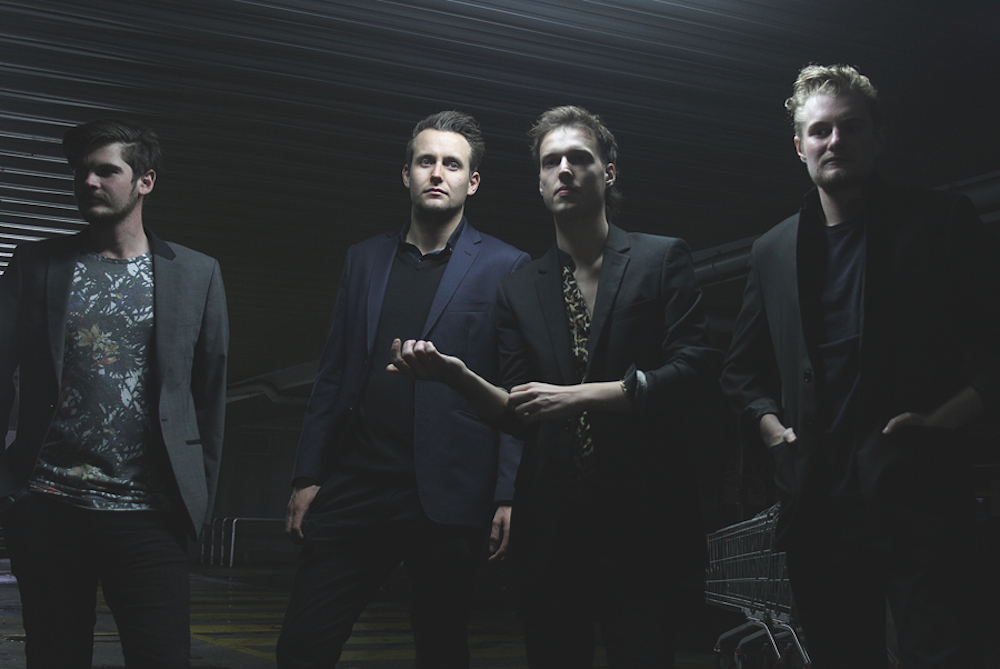 
Melbourne indie outfit VIERA MOTEL are kicking down the doors and calling you to the dance floor with their new track “Take Heart”, released today.

This new band’s foot has been firmly placed on the gas with this track’s breakneck pace, revved on from the euphoric and electrifying piano riff that drives the track home.  “Take Heart” has been released alongside a  retro lyric video.

Exhilarating & glossy, “Take Heart” is the debut single for this Melbourne based 4 piece.  The track features a 90’s Eurodance-inspired piano riff that carries the listener from tempting verses to infectious pre-choruses, building the foundation for a towering chorus which completes the track.

Frontman Jay Pollock delivers an honest self-reflection in the lyrics, springing in and out of falsetto, accompanied by new-wave-inspired pads, drummer Matt Colvin's thumping four to the floor drum track, and Matthew Ferguson’s driving and invigorating guitar.

Melbourne producer Malcolm Besley (Northeast Party House, City Calm Down, Client Liaison) supports the band as they have combine the traits of modern indie-pop with the realness of the 90’s,

We caught up with Jay Pollock (interviewee), Matt Ferguson, Matt Colvin and Dane Sorensen to chat all things music.

Me, Fergs and Dane live in the Eastern Suburbs of Melbourne, where as Colvin's a Brunswickian.

I started creating music by copy/pasting certain sections of other songs on Guitar Pro, then moulding them into my own. They were terrible. I think one of my first songs was called "Half Alive Boys", and the other was about a cow for whatever reason. So anyway, I've been making music for about 11-12 years, but bought my first guitar in 2009. Fergs and I started making music about 8 years ago, whereas Colvin, I'm not entirely sure and Dane... well he's a music teacher so I would like to think he's been at it for a lot longer!

Oh no no. I was lucky to finish Year 12! Being too drunk to attend my first exam pretty much sums it up. As mentioned Dane is a music teacher, so I'm pretty sure he had to get a bit of study under his belt. That's how it works isn't it?

Overall, I think the early 00's new wave movement has greatly influenced the band, the likes of Interpol, The Strokes and The Killers. Personally, I'm a massive Beatles, Oasis and Killers fan, as I've always been fasciated by songs having a massive chorus. Or an irresistible hook which Calvin Harris has always been a master at. So I guess you could say pop would be the style that defines me?...Decent pop that is.

Who are some other Bands, DJ's or Producers you think are killing it at the moment?

I'm in love with Sydney's Alex Cameron. He's easily up there as one of the best songwriters I've heard. He's whole act is incredible and writes those songs you wish you thought of first. Other than that, I'm really out of touch with what's going on in the current music scene. Well, we did a gig in Bendigo a few months back with an act called Rowboy played. Fergs and Colvin loved he's cover of Wonderwall so much they attended his next gig a few months later in Melbourne. On ya Rowboy!!!

Who are are your biggest musical influences?

Personally, I would need to say the stand outs would be Beatles, Oasis, The Killers, Interpol and Calvin Harris off the top of my head. Fergs is big on Interpol, The Libertines and a few upcoming indie acts, which shows in he's guitar playing. Colvin is big on a bit of everything, but likes The Wombats which helped shape our drum sound for our debut single and Dane... well, he likes this band called 'Ninja Sex Party'... don't ask.

I've been listening to OK Computer by Radiohead for the first time! Once I hear an important album such as this, I need to listen to it a few times. I'm worried that'll I'll become really fascinated by it, as once that's the case I'll be listening to it and reading up about it for a fair few weeks!

The last show I went too was Arctic Monkeys at Rod Lava... left me absolutely speechless.. and really, really hungover. Alex Turner is just class and their latest album is one of the best I've ever listened too.

What's your favourite venue to play?

We did a New Years Eve gig at my house last year. We decked out the 'man cave' into a venue! Stage, lights, bar tables, the lot. Would love to officially turn it into a venue but not sure the landlord would agree.

Where do you go out to party?

The home studio is me, and I could probably say Fergs' 'go to' place for a party. Been some interesting nights in there! And some pretty interesting songs as a result (that will never see the light of day I need to add). Colvin's a bit of a reptile when it comes to the nightlife, seen him in some fine form. I would say Dane is on the other end of the reptile scale.

Our debut single 'Take Heart' comes out on July 4th and celebrated with our single launch on July 5th at Yah Yah's from 8pm. Going to be an absolute beeeaaaassssssstttt of a night! Plus you get to see reptilian Colvin in some of the finest form!